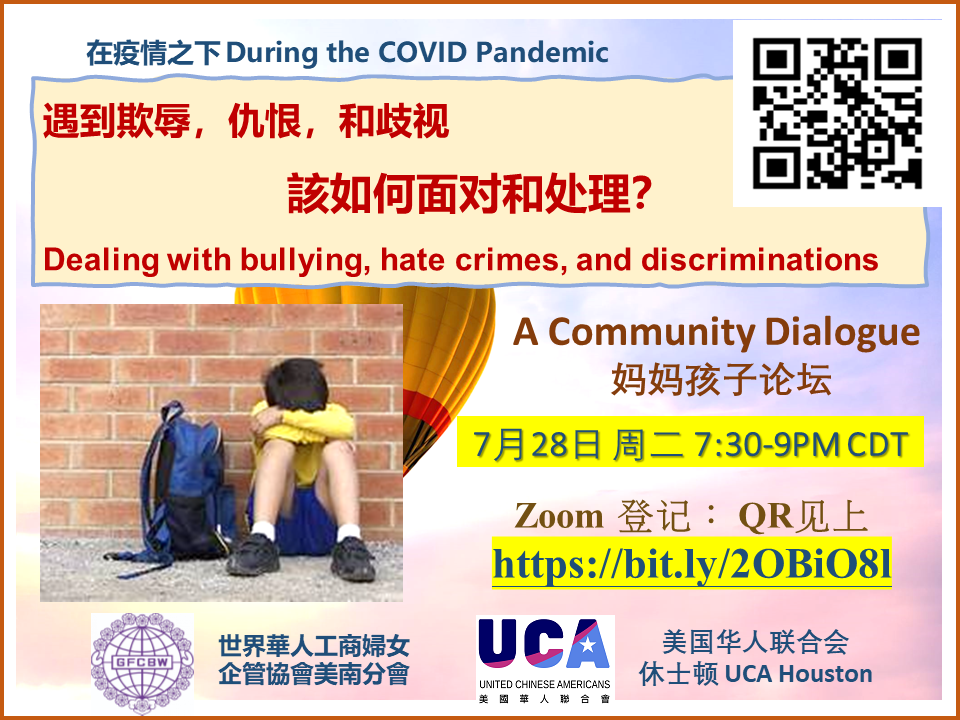 Webinar on July 28, 2020, organized by UCA Houston and Global Federation of Chinese Business Women in Southern USA, with a video recording on UCA Youtube Channel.

As immigrants and minorities in the United States, Chinese Americans may be subject often to prejudice and discrimination. Children may face bullies at school. Women often encounter such situations in workplaces and professional life.

The rising anti-Chinese sentiment and increased incidents of anti-Asian hate crimes have been of great concern to our community recently. The situation has exacerbated during the COVID pandemic and in the 2020 election season when political tactics such as blame game, racial hate, xenophobia, and international conflicts are being deployed in full swing to distract voters and instigate tension. Unfortunately, the Chinese community is caught in between the racial attacks and deteriorating US-China relationship, and is suffering as a scapegoat and bargain chip amid the national crises and global conflicts.

Racist remarks used by some US officials, with labels such as “Chinese virus” and “Kung Flu,” along with broad-stroke accusation under the name of national security and intellectual property theft have further inflamed hostility and incite mistrust towards the Chinese American community.

According to a US-based coalition, hate crimes and other racist incidents have surged to more than 2,000 reported cases since the outbreak of the COVID-19 pandemic. Conceivably, there have been far more unreported cases occurring everywhere in the country and affecting many, many families.

To help the Asian community, especially women and students, address these issues and learn how to deal with the situation, UCA Houston has teamed up with the Global Federation of Chinese Business Women (GFCBW) in Southern USA and hosted a webinar on Tuesday, July 28, at 7:30 PM – 9 PM, entitled, “Dealing with bullying, hate crimes, and discriminations during the COVID-19 pandemic”.

Panelists of the webinar include Dr. Helen Shih, a member of UCA Houston and Alice Hsiao, a member of GFCBW Southern USA. Dr. Helen Shih, an expert in holistic health, has spent many years on scientific studies and professional development. As a UCA board member, Dr. Helen Shih leads the organization’s efforts in Houston. She has also been an advocate and community organizer committed to the social progress, civic engagement, and social-emotional wellbeing of the Asian community.

Alice Hsiao, AIHCP Certified, Nutritional Science, B.S., M.A., is a spiritual counselor. She is an active member of GFCBW Southern USA and the Houston Chinese community. She helps individuals and families deal with mental-spiritual issues related to bullying, discrimination, abuse, and social and domestic violence. She is also a certified floral designer at the Houston Floral Art Institute, where she uses floral arrangements to relieve mental stress and promote healing and trauma release.

Ms. Nancy Chen and Ms. Dawn Lin, the leadership of GFCBW Southern USA, moderated the webinar along with Professor Steven Pei, former chairman of UCA, who provided technical guidance. The webinar focused on the harm of bullying, hate crimes, and discrimination, as well as effective ways to deal with them. Bullying can lead to mental health issues such as depression and self-harm among Chinese youth. Mental health has been recognized as an important aspect of community wellbeing, especially among the youth as the second generation of Chinese families. The webinar also made connections with the conflicts arising from different cultural traditions and with the civil rights concerns.

During the COVID-19 pandemic, the Houston Chinese community has organized numerous relief efforts and humanitarian events. When Asian businesses were impacted and anti-Asian sentiment was on the rise, the community organized the “Asian Americans Salute Frontline Heroes” (AASFH) events with a great impact. Both UCA Houston and GFCBW Southern USA played key roles in these activities.

UCA Houston also organized important events including the “Vincent and Lily Chin Award Ceremony” and the “From Vincent Chin to George Floyd” webinar at the end of June, commemorating two heroes who rescued an Asian family, victims of a March 2020 hate crime in Midland Texas.

UCA, a leading national organization for the welfare and civil rights of Chinese immigrants, has been actively engaged in pandemic relief efforts and in promoting the social status of Chinese Americans. During May,  the Asian American Heritage Month, UCA organized a nationwide donation drive to deliver free Chinese meals to frontline workers and needy families in a “Food of Love” campaign. Recently, UCA has filed an amicus brief to join Harvard University and MIT in their lawsuit to stop the execution by the Trump administration in its ill-conceived visa restriction policy on international students.

Founded in Taiwan in 1994,  GFCBW has helped women compete and succeed in the business world by providing training, networking, and marketing opportunities.  Today, with 74 branches worldwide, GFCBW is the only international association that was started from Taiwan for Chinese women in business (http://gfcbw.org). The Southern USA chapter, the first chapter of GFCBW, has been established in Houston for 35 years. The chapter is not only a platform for business activities to serve overseas Chinese, but also a nonprofit organization to promote community welfare. It has actively contributed to Houston relief efforts during the pandemic, including donating PPE supplies and meals. For more information,  please visit http://gfcbw-houston.org.