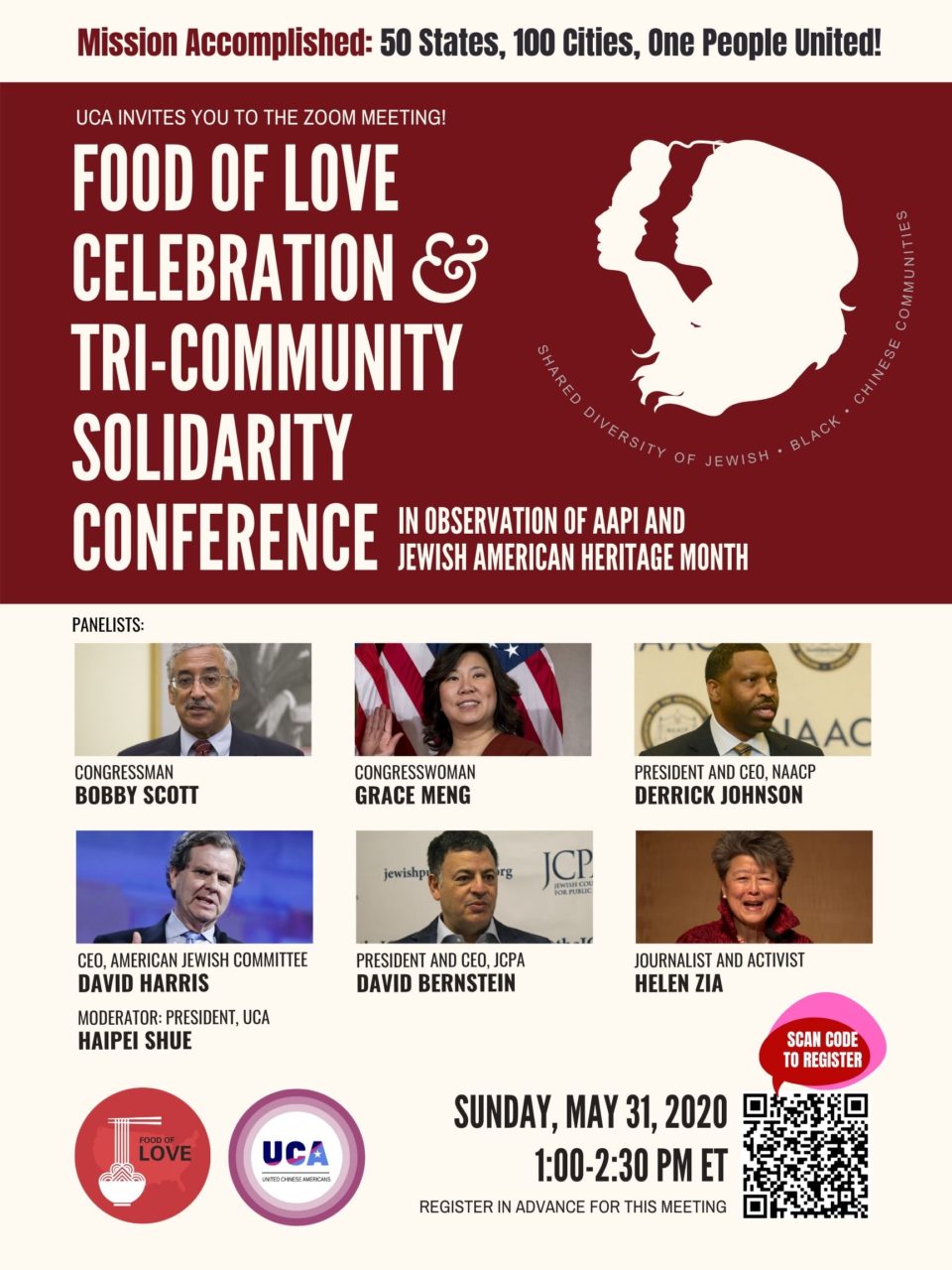 May 29, Washington, D.C
For Immediate Release

On Sunday, May 31, 2020 at 1pm EST, United Chinese Americans (UCA) will hold a special conference on COVID-19 relief efforts and hate crimes in the United States. The conference will first spotlight the achievements of its inaugural “Food of Love” program and then feature a panel dialogue between leaders from Chinese, Jewish, and African American communities.

When certain political leaders began inciting anti-Chinese sentiment with their racist and incendiary remarks, Chinese Americans all across the country became victims of hate crimes. Channeling Michelle Obama’s philosophy, “When they go low, we go high,” the Chinese American community decided to take the high road.

Americans, regardless of race or creed, LOVE Chinese food. There are 41,000 Chinese restaurants in America, 3 times the number of McDonad’s and at $17 billion in annual sales, which is on par with the fast food giant. To combat hate, Chinese Americans chose love by launching the Food of Love program. The motto: 50 states, 100 cities, One People United. Since early May, Chinese American communities have served tens of thousands of meals to tens of thousands of frontline workers and fellow Americans in need.

“We have made more friends in our communities,” says Haipei Shue, UCA President. “We have made a difference.”

Despite these efforts and triumphs in our local communities, on the national political stage, even more frightening developments are occurring. Recently, Senator Rick Scott has made inflammatory accusations that every Chinese person is a communist spy. Just this week, Senators Tom Cotton and Marsha Blackburn introduced divisive and discriminatory legislation, the Secure Campus Act, that would prohibit Chinese students from receiving visas to the United States for graduate or postgraduate studies in STEM fields. The new bill harkens back to the infamous Chinese Exclusion Act. Instead of denouncing this ill-conceived legislation, President Trump issued a proclamation that legitimizes the act.

At this very moment, the City of Minneapolis is engulfed in flames as a result of the murder of George Floyd, another victim of our nation’s seemingly never-ending and ever-increasing list of racial crimes. As we continue with COVID-19 relief efforts side by side with our fellow Americans, we must also fight racism on all fronts. At this time of crisis, history has called upon us to reach across communities to stand up and make America a country that lives up to its ideals.

During the second half of the conference, distinguished leaders from African American, Chinese, and Jewish communities will discuss challenges each community faces and ways to work together to address injustice. The guest speakers include: