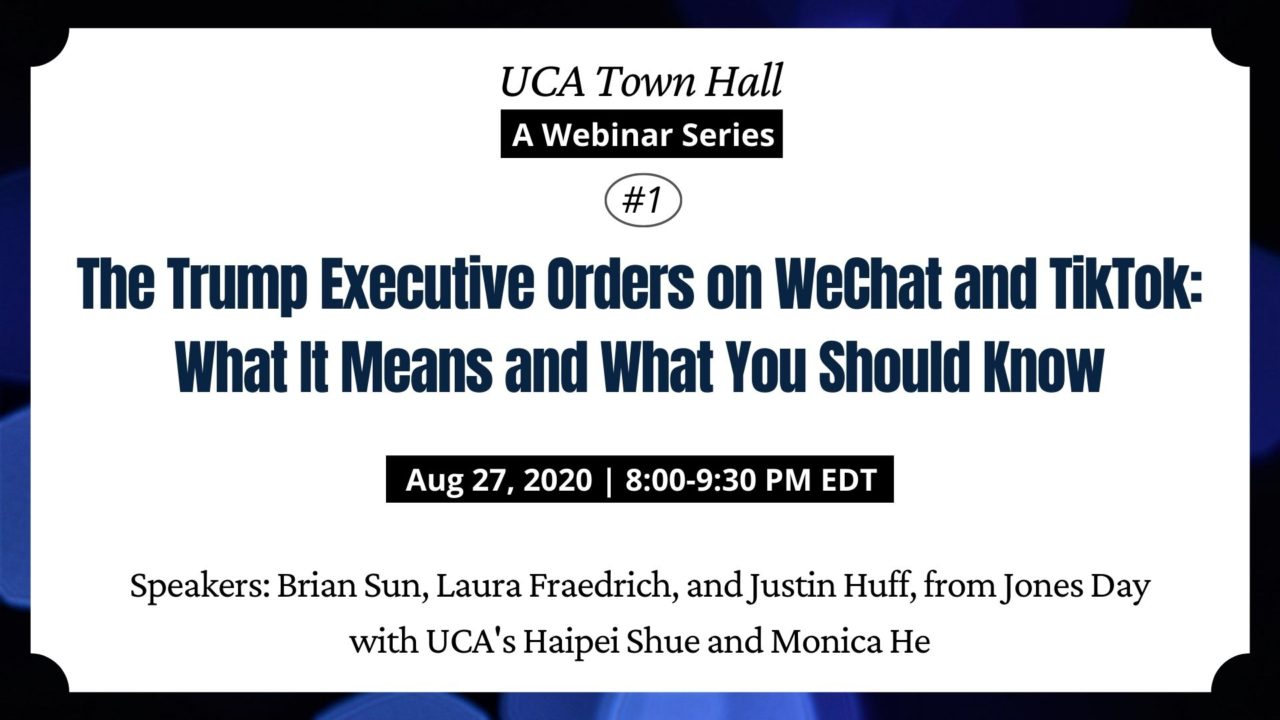 Online Webinar I – The Trump Executive Order on WeChat and TikTok: What Does It Mean and What You Should Know

UCA is pleased to invite you to join us for the inaugural session of our webinar series: “UCA Townhall,” highlighting key topics facing the Chinese American community with the goal to provide information, facilitate dialogue, and promote civic engagement. The first webinar, to be held on Thursday, August 27, starting at 8PM EDT, will examine President Trump’s Executive Order to effectively ban WeChat and TikTok. Through focused presentations and an engaging panel discussion, our experts will provide the latest updates and analysis on the Executive Order, dissect potential recourse and ongoing challenges, and shed light on the larger U.S.-China context, as well as what may happen next.

This online event will be free via Zoom and will also be live broadcast on Youtube.

REGISTER FOR THE August 27 Event HERE:

Send your questions for the Q&A Session ahead of time to UCA by emailing social@ucausa.org

Brian Sun has earned a national reputation as a distinguished trial lawyer in complex business litigation and white collar criminal defense. He is a former federal prosecutor, a Fellow of the American College of Trial Lawyers, and has been named by Lawdragon Magazine as one of America’s 500 leading lawyers. Brian is recognized as a Band 1 lawyer by Chambers in the area of white collar criminal defense and government investigations. He was also Partner-in-Charge of the Los Angeles Office for several years.

Brian is a former president of the National Asian Pacific American Bar Association (NAPABA) and the Los Angeles Regional Foodbank. He has been honored by NAPABA with its Trailblazer Award and by the Southern California Chinese Lawyers Association with its Lifetime Achievement Award. He also served as a deputy general counsel to the Christopher Commission, which recommended sweeping reforms of the Los Angeles Police Department in the wake of the Rodney King incident.

Brian has been a frequent UCA webinar contributor, past speaking topics include U.S. national security concerns and its implications on the Asian American community, as well as how to navigate the ongoing U.S.-China conflict for scientists of Chinese descent, including in the face of discrimination or wrongful prosecution.

For more than 20 years, Laura Fraedrich has been helping clients achieve their goals in complex international trade matters, including CFIUS (Committee on Foreign Investment in the United States), economic sanctions, export control, customs, and trade remedy matters. Laura advises and represents clients in foreign direct investment matters, including filing CFIUS notices and negotiating mitigation agreements. She also represents clients in export control matters, including issues related to the International Traffic in Arms Regulations, the Export Administration Regulations, and the various embargoes administered by the Office of Foreign Assets Control (OFAC).

Laura is a frequent speaker on international trade, national security laws, government sanctions, and investment restriction policies and advises businesses on how to comply with the latest regulations.

Justin Huff has more than a decade of governmental experience and has negotiated multiple complex agreements for the United States government to ensure U.S. national security. Prior to joining Jones Day in 2018, Justin was a deputy director of the Office of Investment Security at the Department of the Treasury, where he assisted in the coordination of the office responsible for the Treasury’s role chairing the Committee on Foreign Investment in the United States (CFIUS), an interagency process that reviews proposed mergers and acquisitions for potential national security concerns.

Justin is a frequent speaker on U.S. investment and export restriction policies and their impact on cross-border businesses, including intellectual property protection, M&A and partnerships.

Stay tuned for announcements on the exciting line-up of the UCA Townhall Webinar Series. The 2nd Webinar in the Series will examine business reactions and potential commercial impact from the Trump Executive Order on WeChat and TikTok.