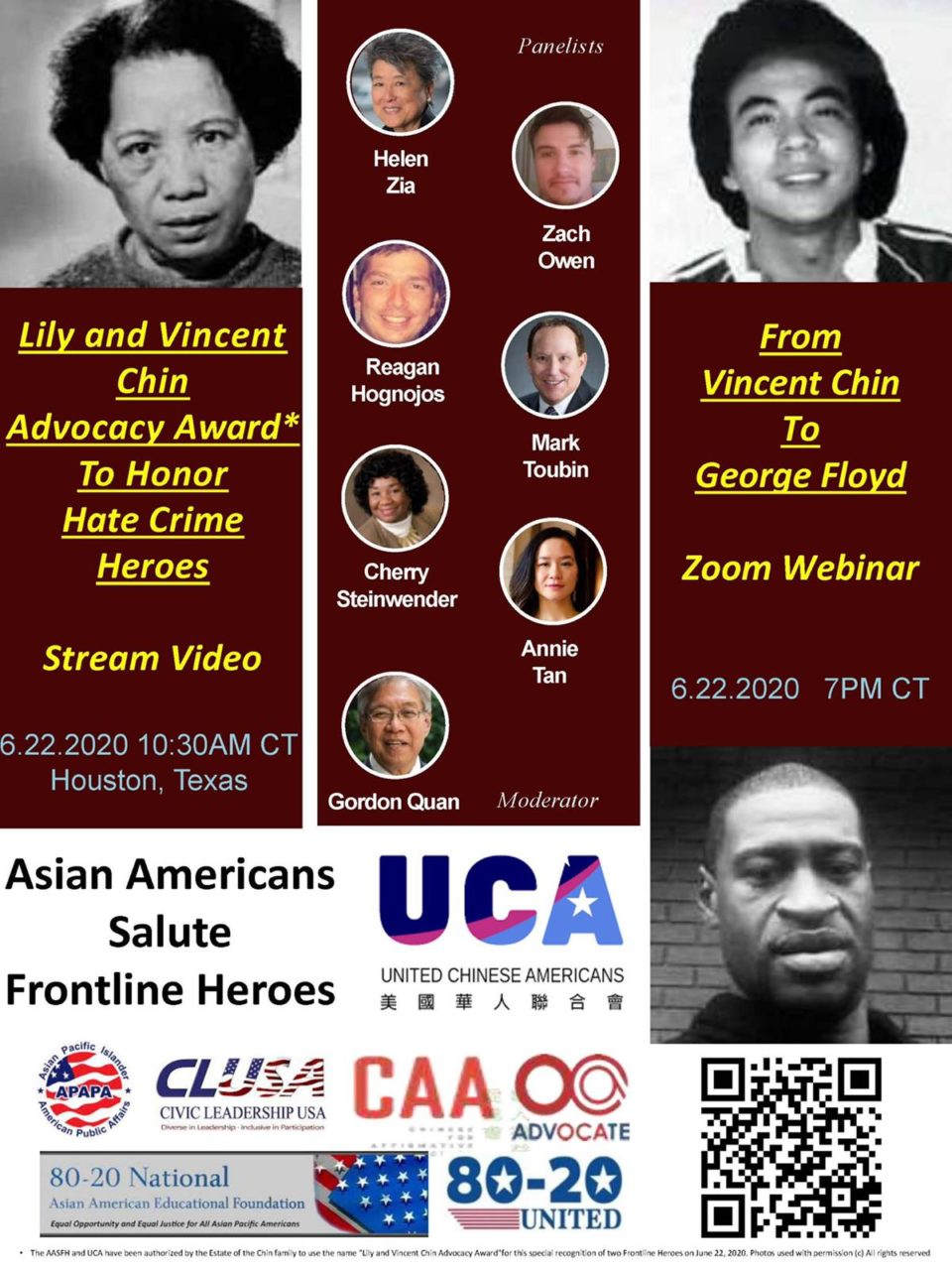 On June 23rd, 1982, Chinese American Vincent Chin died in Detroit, Michigan after being attacked and fatally beaten by two white autoworkers for looking like Japanese, at a time of rising anti-Japanese and anti-Asian racial tension. Vincent Chin’s death has become a crucial turning point in Asian American history and civil rights movement led by Lily Chin, Vincent’s mother, who stood up courageously for her son’s justice.

In March 2020, 38 years later, a Burmese family Cung, was mistaken to be ‘Chinese infecting people with Coronavirus’ and was attacked at a local Sam’s Club store in Midland, TX. The family’s two children, ages 2 and 6, along with the father, were badly wounded by knife cuts, some were even left on the face.

Two months later, George Floyd was killed in Minneapolis by a white policeman. His death and the recent killing of innocent African Americans, have fueled the rage of the community, already distressed disproportionally in the COVID-19 pandemics. The tragedies continue to rip the country apart and generated national and international outcries against systematic racism and institutional discrimination in the US against people of color.

UCA and many Asian American organizations have come out firmly and clearly immediately after George Floyd’s death, condemning such brutality and crimes. We stand up together with our brothers and sisters who have been tormented by the dark side of American’s history. We are here to unite with the vulnerable communities and to ask for the continuous push for racial justice and social progress in this country.

On June 22nd, 2020, the 38 anniversary of Vincint Chin’s death, UCA is joining Asian American communities and anti-hate-crime anti-racism organizations to host an award ceremony and an advocacy event in commemorating this historical moment. We invite all community members to join us on these special occasions to honor the Midland heroes and to participate in the community dialogue on how we can move forward from this point on.

The donation to the victim family can be continuously made here: https://www.memberplanet.com//campaign/united-chinese-americans/general_giving_158_1_1

Two Midland, Texas heroes, Zach Owen and Bernie Ramirez, who intervened in a violent anti-Asian stabbing of the Cung Family, a Burmese father and his two young sons, will receive the Lily and Vincent Chin Advocacy Award* on Monday, June 22 at 10:30 am CST at the Chinese Community Center in Houston, TX.  Despite injuries to his leg and hand, Zach Owen, with the help of Bernie Ramirez, disarmed and subdued the attacker until the police arrived. Labeled a “hate crime”, the suspect said he thought the family was Chinese and spreading the coronavirus.

The award ceremony is organized by Asian American organizations including those in the Asian American Salute Front Heroes campaign Houston, UCA, and sponsored by many other local and national organizations. UCA will present a donation to the Cung Family to support the medical expenses for future surgeries and challenges the 2 and 6 year-old children may face due to the attack.

To watch the event live, please join by: https://www.youtube.com/watch?v=opm1Lbx9pdc.

The donation can be continuously made here: https://www.memberplanet.com//campaign/united-chinese-americans/general_giving_158_1_1

Please email steven.pei@ucausa.org for questions or comments on the donation and award ceremony.

From Vincent Chin to George Floyd:

A panel discussion will be held virtually via Zoom on the evening of Monday, June 22 at 7:00 pm CST, discussing the 38th anniversary of the brutal killing of Vincent Chin and the recent killing of George Floyd.  Both deaths created and sustained a major movement to oppose racial hate and discrimination.

Please register the zoom meeting ahead of time at: https://form.jotform.com/201684865046057 , and email steven.pei@ucausa.org for questions or comments on this panel discussion.

“From Vincent Chin to George Floyd” will feature:

An award-winning journalist and community activist who has covered Asian American communities and social and political movements for many years. She is a founder in the movement for justice for Vincent Chin and is outspoken voice for human rights.

Recipient of the Lily and Vincent Chin Advocacy Award* for risking his life to save the Burmese family from hate crime committed at Midland, TX on March 14, 2020.

Friend of the Cung family.

Attorney and serves as the Regional Director for the ADL’s Southwest Regional Office in Houston, Texas.

Co-Executive Director and co-founder of the Center for the Healing of Racism.

Special education teacher and storyteller in New York’s Chinatown.  She has been a fighter for public education, unions, tenants and Asian American rights.  She is a cousin of the late Vincent Chin.

*AASFH has been authorized by the Estate of the Chin family to use the name “Lily and Vincent Chin Advocacy Award” for this special recognition of two Frontline Heroes on June 22, 2020. Photos used with permission (c) All rights reserved.

“From Vincent Chin to George Floyd” in 2020 Summer Semester

UCA is announcing a student scholarship to be awarded to Chinese American students who are actively engaged in fighting against racism and hate crimes, and propel the progress towards civil rights protection and racial justice. The summer 2020 scholarship to honor the “From Vincent Chin to George Floyd” event will be given to a high school student led project in the amount of $1000 and to a college student led project in the amount of $1000.

The winners will be invited to a UCA national forum to discuss their work, and present their essays and materials. Content of their projects including the essays, media, and presentations will be promoted on UCA website and social media channels