The reception for the second anniversary of the Washington United Chinese Americans (UCAWA) chapter’s founding was on August 19, 2021 in downtown Seattle. More than 50 local residents attended the reception, discussing concerns of the community and celebrating the chapter’s founding. UCAWA was founded in August 2019.

Seattle was one of the first cities in the U.S. where Chinese people settled and established themselves, but the city has been a place where Chinese people have endured much discrimination and racism, said United Chinese Americans (UCA) President Haipei Shue, who traveled to Seattle from Washington D.C. for the reception.

“Now, relations between China and the U.S. are rapidly deteriorating again, and our society is once again being eroded by anti-Asian hatred. We as Chinese Americans should organize and transform our society.”

Since the beginning of the pandemic, UCAWA and more than 60 local Seattle area Chinese community organizations, all of which make up the Chinese Community Alliance, have worked together to donate $140,000 to EvergreenHealth hospital and integrated health care system (EvergreenHealth). EvergreenHealth is the medical center that first treated an outbreak of COVID-19 in a U.S. nursing home, which was located in the Seattle area. 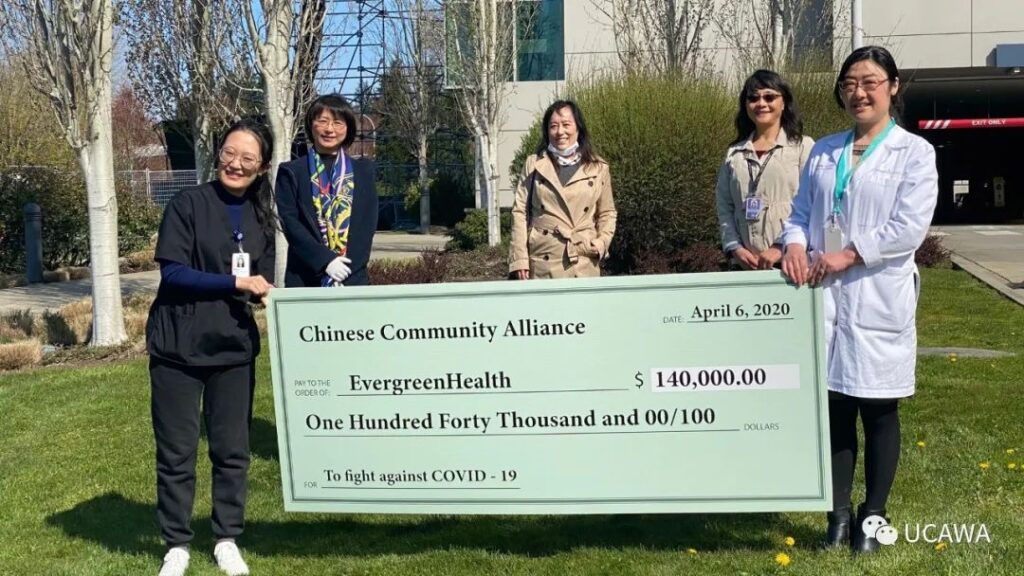 For the hard work and over the top generosity, EvergreenHealth awarded the Chinese Community Alliance the 2021 Evergreen Spirit of Giving Award.

“UCA has not only made great contributions to promoting the participation of Chinese Americans in politics but has also worked hard to speak out and fight for the rights and interests of Chinese Americans,” said Edmonds City Council candidate Will Chen. He added that as first-generation American citizens we should actively participate in the political life of the U.S. and make our voices heard.

Shue noted that UCA successfully pushed the U.S. House of Representatives to pass an apology resolution for the Chinese Exclusion Act of 1882.

“We are currently working to end the U.S. Department of Justice’s “China Initiative” program,” he said.

UCAWA and volunteers from Microsoft, Amazon, and other Seattle technology companies organized thousands of large demonstrations in the greater Seattle area to mourn the harm of COVID-19 and to mourn the harm of anti-Asian and anti-Chinese racism inflicted upon the local Asian, Asian American, and Chinese communities in the state.

United Chinese Americans (UCA) is a national nonprofit organization with the mission to empower all Chinese Americans. UCA encourages civic participation, political engagement, youth education, and the preservation of Chinese American heritage and culture. While the organization’s headquarters is in Washington, D.C., UCA has 12 local chapters and over 30 community partners across nearly all 50 States. UCA activities have included: Food of Love, Town Halls, Youth Education and Mental Health initiatives, and more. UCA was incorporated in 2016. To learn more about UCA, please visit https://ucausa.org/ and follow UCA on WeChat, Facebook, Twitter, Instagram, Youtube, and LinkedIn.