Scroll down for Chinese 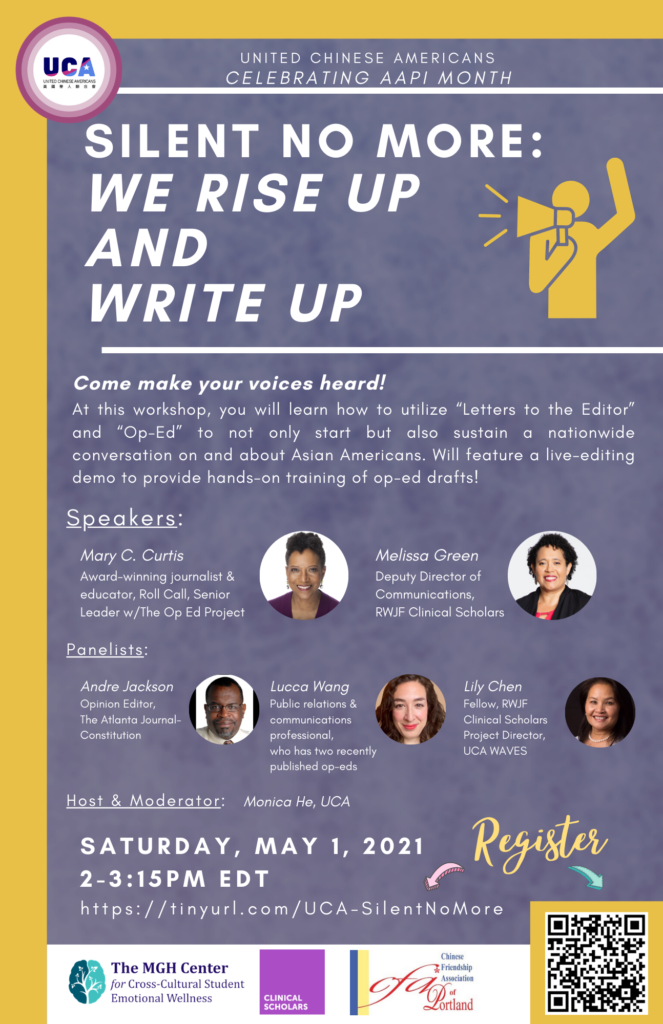 On May 1, 2021, UCA held a “Silent No More: We Rise-Up and Write-Up” webinar to kick-off the month-long celebration of Asian American and Pacific Islander Heritage. This webinar was a part of a new initiative that aims to make our voices heard and presence felt through opinions and editorials (op-eds).

Over 140 people, mostly Asian Americans, attended the webinar. The event has generated considerable interest and enthusiasm; we have received very positive feedback and op-ed drafts from our members. The recording of the webinar is available at below:

Pre-survey data were collected from the 272 people who registered. The main things we noted were:

(1) There was broad geographic representation among the registrants (37+ states and 11 countries).

(2) The sample was self-selective, with very high education levels. The majority were women and adults.

(3) An overwhelming majority of the registrants agreed that is it important to write and publish articles in order to make our voices heard in the nationwide conversations about Asian American issues.

(4) While many of them felt comfortable writing, only a small percentage of them have written an op-ed article before.

(5) There were multiple reasons for the lack of publications. Some of them could be addressed through providing training and resources.

(6) WeChat is the main source of communication among the Chinese American community.

Here is a brief summary of the complete data:

(2) While the majority of registrants were in the United States, thanks to our online platform we also had international representation from Canada, Australia, China, and Taiwan, as well as seven other countries.

(3) Registrants from the United States were from over 37 states. Seven states had the most registrants (over 5% each): CA, IL, NC, MA, NJ, NY, and TX.

(6) Most of the registrants were adults; about 3% were youth.

(7) Almost 74% of the registrants have a graduate degree.

(1) 88% agreed that it is important to make our voices heard in the nationwide conversations about Asian American issues.

(2) 89% agreed that writing and publications by Asian Americans can help advocate for our voices to broader communities on the rise of anti-Asian hate crimes.

(3) 90% agreed that our community members need to reach as many local newspapers as we can by telling our stories and sharing our thoughts.

(4) 75% felt comfortable with writing to local newspapers and other media outlets to express their views.

(5) 92% wanted to learn how to write and submit an article on Asian American issues.

(7) There were multiple reasons for not being able to write or publish, including not knowing where to submit an article (35%) and how to write (31%), having concerns about English writing skills (29%), (d) not having time to write (26%), etc.

(8) Most of the registrants found out about the webinar through WeChat. Other sources included community members, speakers and panelists from other webinars, and other social media outlets (e.g., Facebook, Instagram, Twitter, LinkedIn).

A few pertinent results are highlighted in the charts below. 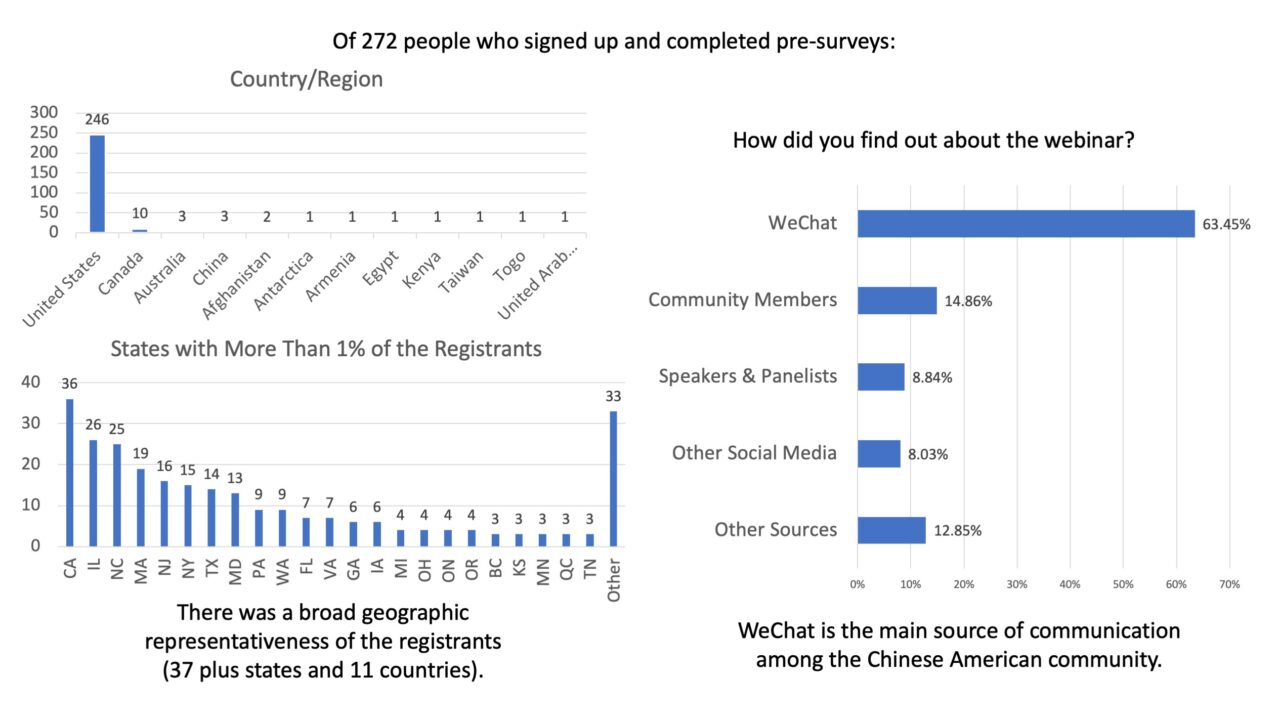 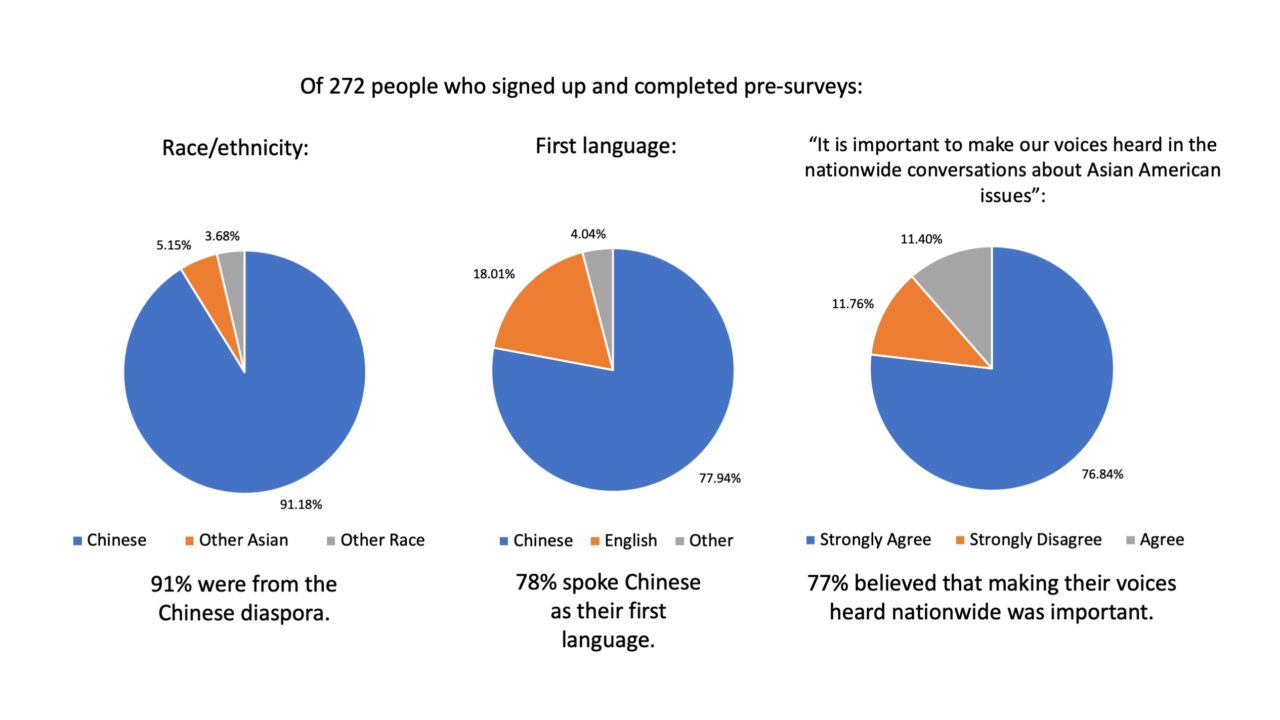 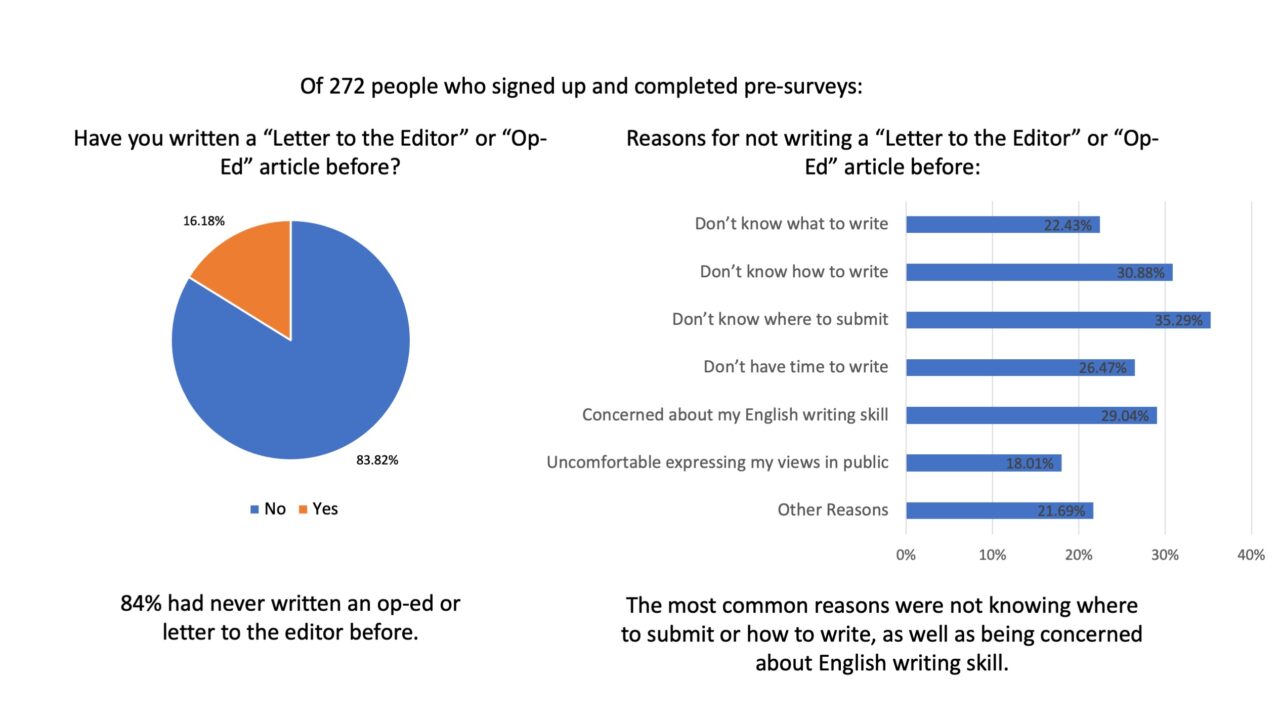 Mary C. Curtis, a columnist at Roll Call, is an award-winning journalist and educator based in Charlotte, N.C., and Washington, D.C. She is host of the CQ Roll Call podcast “Equal Time, with Mary C. Curtis.” She has contributed to NBC News, NPR, The Washington Post, The Root, ESPN’s The Undefeated and talks politics on WCCB-TV and NPR-affiliate WFAE in Charlotte. Curtis has worked at The New York Times, the Charlotte Observer, the Baltimore Sun, and the Associated Press, and was national correspondent for AOL’s Politics Daily. Her coverage specialty is the intersection of politics, culture and race, and she has covered the 2008, 2012, 2016 and 2020 presidential campaigns.

Curtis is a Senior Leader with The OpEd Project, facilitating “Write to Change the World” seminars, at Yale University, Cornell University, and the Ford Foundation and at the Aspen New Voices Fellowship in Johannesburg, South Africa. Curtis was a Nieman Fellow at Harvard University and a Kiplinger Fellow, in social media, at Ohio State.

Curtis was chosen to be included in The HistoryMakers, the single largest archival collection of its kind in the world designed to promote and celebrate the successes and to document movements, events and organizations that are important to the African American community and to American society; it is available digitally and permanently archived in the Library of Congress.

Her honors include Clarion Awards from the Association for Women in Communications, awards from the National Headliners and the Society of Professional Journalists, three first-place awards from the National Association of Black Journalists, two first-place SPJ DC Dateline awards, and the Thomas Wolfe Award for an examination of Confederate heritage groups. Curtis has contributed to several books, including an essay in “Now What: The Voters Have Spoken, Essays on Life After Trump” and “Covering Politics in the Age of Trump.”

Melissa Green is the Deputy Director for Communications for Clinical Scholars, a Robert Wood Johnson Foundation program. Melissa began her career providing technical assistance to health departments and community-based organizations in North Carolina. Her public health practice and research focus is health equity and collaboration between communities and academic institutions. Her research interests include health disparities across the cancer continuum, peer support interventions, disease prevention, and factors that influence participation in health research. She earned her Masters of Public Health from the UNC-Chapel Hill School of Public Health in Health. She is a staff member of UNC’s Center for Health Equity Research, adjunct faculty in UNC Gillings School of Global Public Health’s Maternal and Child Health department and a doctoral candidate at A. T. Still University.

Previously, Jackson was Senior Editor for business, federal and state news at the AJC, which included overseeing the state capital and D.C. bureaus. He joined the AJC in 2008 as an editorial writer covering business and the economy. He began his newspapering career in 1984.

Lucca Wang 王曦 is a biracial and third-generation Chinese American woman native to the Midwest where she lives now. She has been a public relations and communications professional for 14 years, and and has two recently published op-eds in the Kansas City Star and Ms. Magazine on her own experience and perspective and the long history of anti-Asian racism in the U.S. and what is happening now. She is a journalism school graduate of Drake University and an alum of The Op-Ed Project.

Co-hosted by United Chinese Americans (UCA) and the Asian and Pacific Islander Caucus of the University of North Carolina (www.apicunc.org) 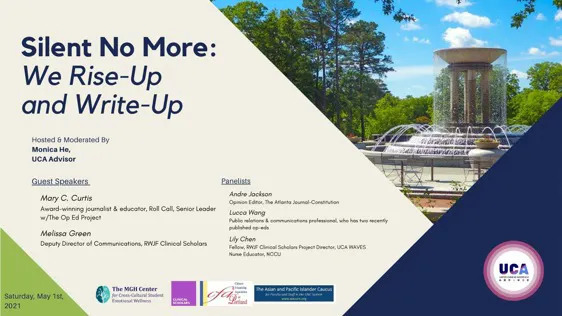 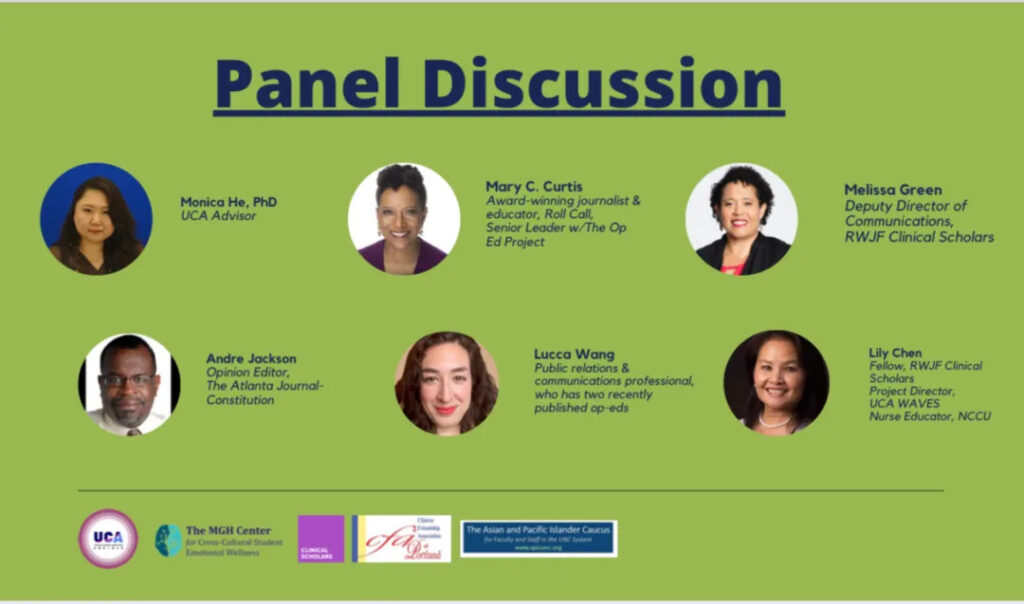 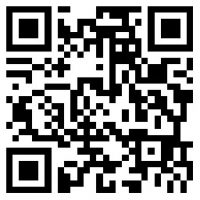 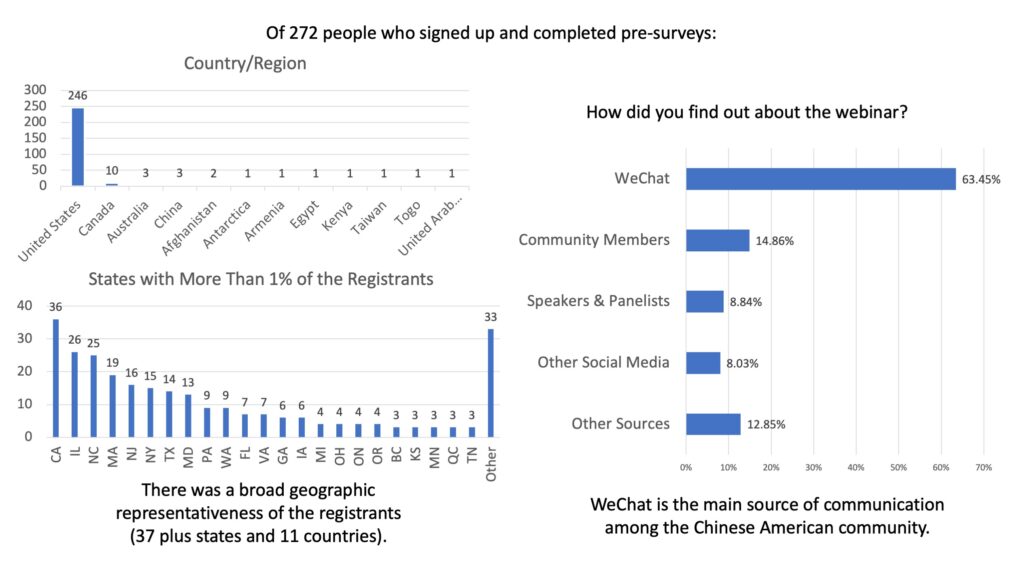 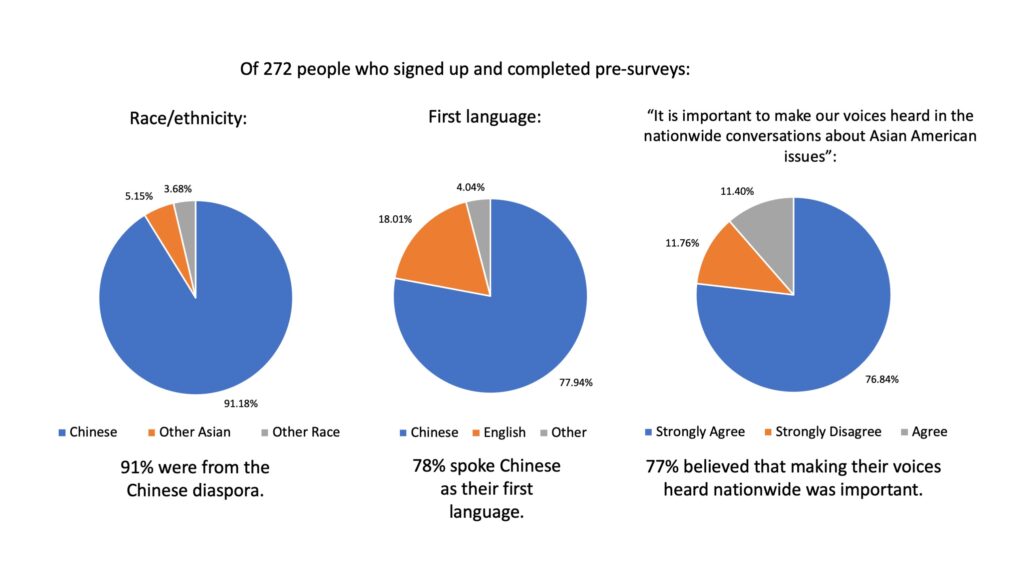 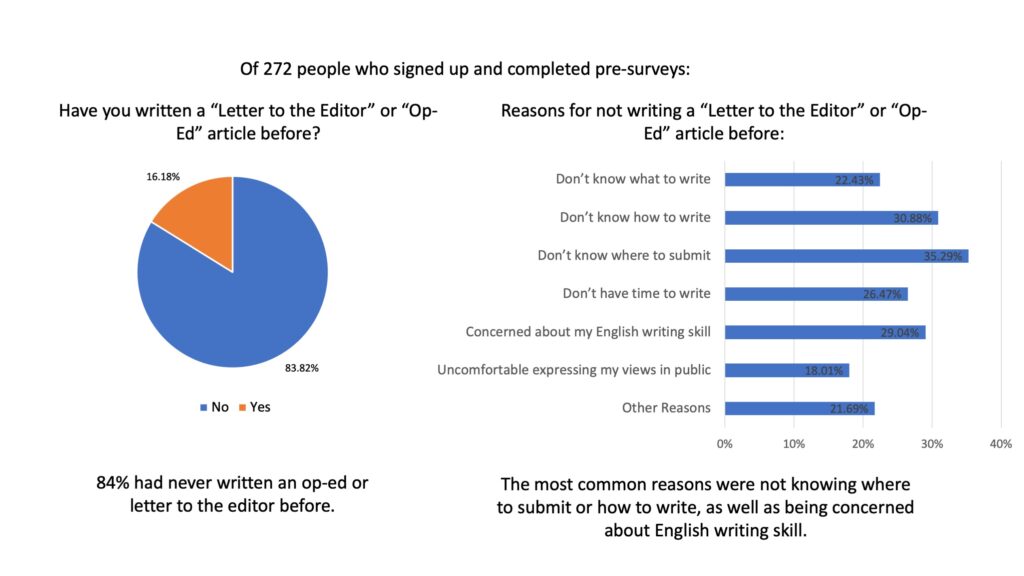 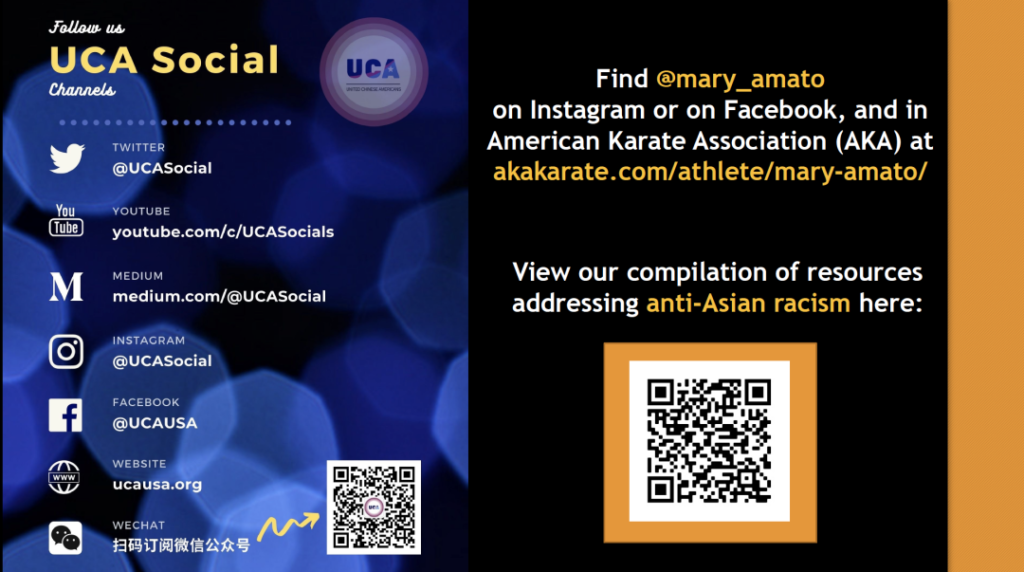 她的荣誉包括美国女性传媒协会颁发的号角奖、全国头条新闻和专业记者协会颁发的奖项、全国黑人记者协会颁发的三项一等奖、两项SPJ DC Dateline一等奖，以及托马斯沃尔夫奖。Curtis撰写了几本书，包括一篇文章《现在该做什么: 选民们的发言，特朗普之后的生活随笔》(Now What: The Voters Have Spoken, Essays on Life After Trump)和《特朗普时代的政治报道》(Covering Politics in The Age of Trump)。

The Asian and Pacific Islander Caucus 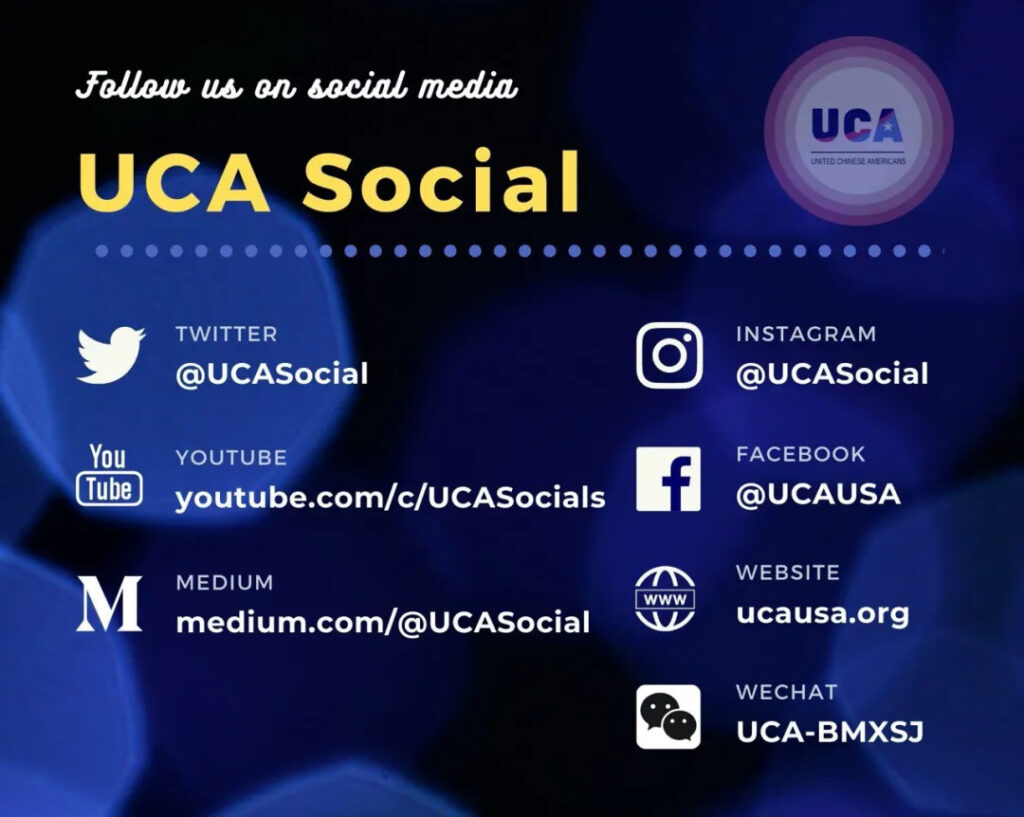