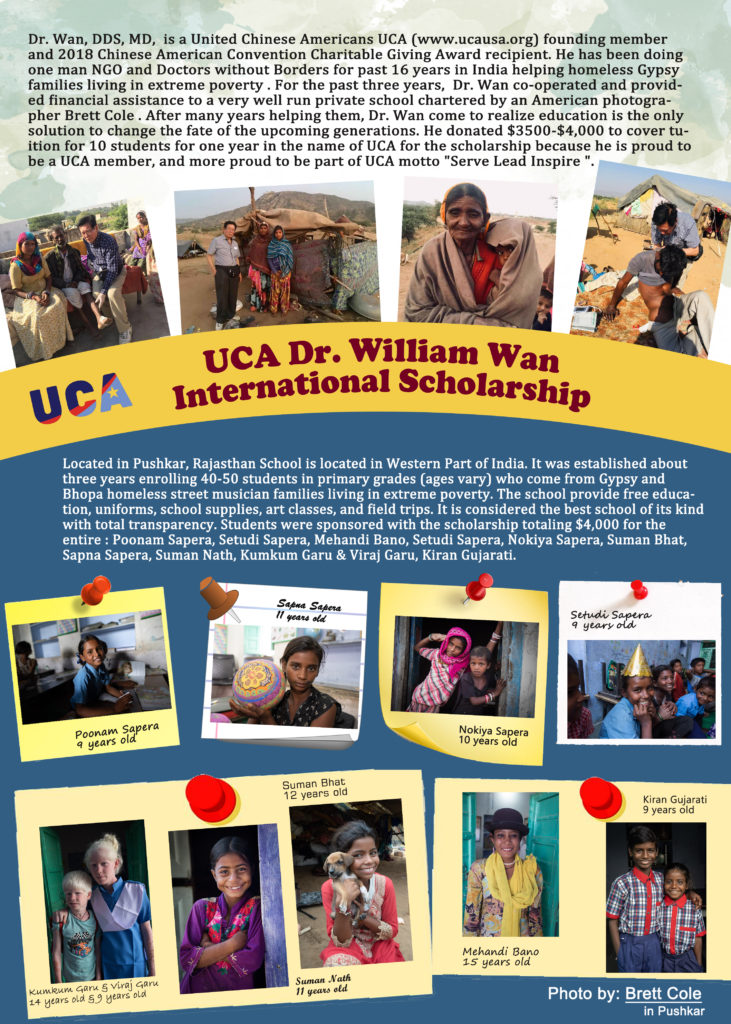 Bill Wan, DDS, MD, an inaugural UCA member, has been running a one-man NGO and volunteering with Doctors Without Borders for the past 16 years. Through these organizations, he has served among the gypsy and Bhopa musician families, tent dwellers who have lived in the desert in the western part of India for generations.

These families live in extreme poverty. Their tents leak like faucets during the monsoon rain and are freezing cold during the winter nights. Children are born poor without any chance of attending school. Older women with broken legs or hips crawl in the sand without crutches. Infant mortality is high. Sick people cannot afford proper treatment and lack money to buy medicine. Burned hands or skin commonly become disfigured. Tropical skin diseases and infection are accepted as normal life or treated with ineffective home remedies. Other times, sick patients with serious medical problems go to temples for “miracle” cures.

His first opportunity came when he learned of two little girls, aged 4 and 7, who were orphaned after their mother was brutally murdered by their father. Dr. Wan “adopted” the girls, supplying them with school uniforms, winter clothing, etc., and even opening a trust for them. Today the girls, now 19 and 22, are prospering. The 19-year-old has become a sought-after fashion designer and the 22-year-old earned a Master’s degree and is on her way to becoming a teacher.

“We won’t be here without you,” they told Dr. Wan. It was quite a humbling experience and some of the most gratifying words he has heard.

Since then, Dr. Wan has taken every chance to help the members of the community. This includes a woman in her 30s who was on the edge of death after a septic abortion. Her husband refused to allow Dr. Wan to take her to a private hospital for emergency care because he believed she would be cured by going to a Hindu temple. As the mother of 5 children, ages 5 months to 14 years, lay inside a hot tent with a 104-degree F fever, Dr. Wan knew she would not make it another day without immediate hospital care. So, Dr. Wan took her to a private hospital the following morning while her husband was at the local market. Today, the mother is thriving, happy and healthy with beautiful smiles whenever they reunite.

Another woman also in her early 30s was brutally cut from her forehead all the way to her chin by a drunken husband. As she hid in a tent with her 4 young kids, without access to medical care, her wounds had become infected with pus and her right eye had swelled shut. Luckily, when Dr. Wan learned about the woman’s situation, he decided to stay in the community for another week, taking care of her, changing her dressing daily and helping to administer her antibiotics. Now she is happily remarried with another baby.

These are just a few of the ways Dr. Wan has used medicine to help the community. He has also performed minor surgeries, taken care of treatable illnesses, and brought ill patients to private hospitals. For more serious medical conditions, he personally accompanied his patients to facilities until they receive proper treatment.

As one prestigious professional journal recently wrote: “Dr. Wan believes his experience has been both humbling and exhilarating by being able to help another human being, relieving their pain, helping them to avoid hunger and change their course in life. He also believes that charity has to start from the heart.”

Ultimately, Dr. Wan believes that education is the only solution that can change the fate of the upcoming generations. He believes that if children are deprived of education, they will inevitably repeat the vicious cycle of poverty without a chance of living a fruitful life.

In keeping with this belief, Dr. Wan has co-operated and offered financial assistance to a very well-run private school for the past three years. The school was chartered by an American photographer who shares Dr. Wan’s views on the power of education. The small, primary school, which serves children from gypsy and Bhopa music families, is considered the best of its kind and has total transparency. In addition to offering well-rounded education for free, the school provides lunches, uniforms, school supplies, art classes, and field trips.

Dr. Wan believes that UCA can share its common goals of “service, leadership and inspiration” not just with Asian Americans, but with all people even in foreign lands. He believes that with education, people can find their voice, improve their living conditions, and help to eradicate poverty,

So, for the first time this year, 10 scholarships have been sponsored under the auspicious name of UCA. With the current basic provision, $3500-$,4000 will support 10 students. Next school year, it is hoped that an increase in contributions will help to provide for more students.

Dr. Wan says he is proud to be a UCA member and even more proud to be part of the UCA motto of “service, leadership and inspiration” to be the goals in all lives.